Acting Coach Scotland :: How to Rehearse a Monologue

Acting Coach Scotland Blog How to Rehearse a Monologue

How to Rehearse a Monologue

Audition Monologues are somewhat my specialty as an Acting Coach. So far in 2019, 100% of my 1-2-1 private students (who have had more than 2 sessions with me) this year have either been offered recalls or places at top UK Drama Schools.

When it comes to performing monologues some people ‘just’ want to work on character choices (although they usually can’t tell you what they mean by that!). Some people want to simply ‘action’ (or as I call it ‘tactic’) their lines. In my experience it’s fair to say that most people battle through their monologue on often mis-guided ‘gut-instinct’.

But there is a better way; at ACS we have developed a PROCESS that you can follow which  can be applied to ANY monologue, whether modern or classical, tragic or comic.

The best thing about this process, is that it is relatively simple to follow and makes the monologue unmistakably YOURS (this is especially important if its Shakespeare and you have that dreaded worry about it having been done a million times before).

I have had private Drama School Audition clients work with me for a couple of sessions, go away and apply the process to all their monologues (yes you do have to put the effort in, there’s no point me giving you all the answers!) and then come back to me and present a rough set of great monologue performances, ready to polish up for audition time! 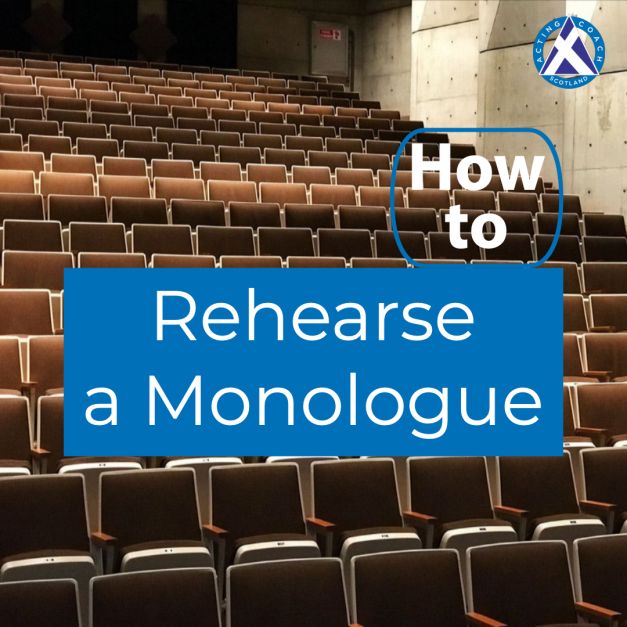 So here are my lucky seven tips for getting the best out of your monologue.

This is what I refer to as ‘The Journey’ of the topic, issue, or more specifically task that you should be exploring (we’ll figure out what that IS later!)

As we go through time, the intensity of the monologue rises until it reaches its peak intensity at the climax. However between those moments you have to work out how you’re intensity will rise and fall, or peaks and troughs. This is important as the listener craves dynamics, there must be change and movement in pace, energy and intensity or the monologue becomes too boring and stale.

If you would like to book sessions with me via Skype or in person, please contact hello@actingcoachscotland.co.uk