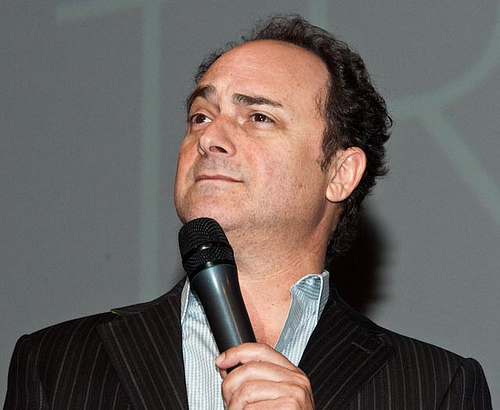 Kevin Pollak is an actor and comedian based in Los Angeles, CA. He recently joined the social networking site Twitter and has begun to utilise both it, and YouTube as a means of connecting with his audience. In this exclusive chat for Acting-Blog.com with Philip Larkin (no, not THEE Philip Larkin) Kevin Pollak talks about acting, twitter and his television shows.

ACTING-BLOG.COM: Kevin Pollak, most of us know you from your acting roles in films such as Willow, Wayne’s World and The Usual Suspects – although you were originally a standup comedian, from a very early age and still are for that matter – but Why did you decide to become an actor? How did that happen?

KEVIN POLLAK: I decided to become an actor at the age of six or seven, actually. I used to exit the theater, after having just watched a film, and proceed to act as whatever character from the film I enjoyed the most. I would be that character for several days after. Although my mom would laugh, it went usually from cute to annoying in under 24 hours.

ACTING-BLOG.COM: What’s the best advice you could give to actors?

KEVIN POLLAK: Just be prepared to give your life to it. If the rejection doesn’t destroy your will to live, it’s a lifelong commitment. And not to go Yoda on you, but it’s important to try to learn from the journey, and not be so focused on the destination.

ACTING-BLOG.COM:   Just very recently, you have began ‘tweeting’ on Twitter and using your YouTube Channel to post videos. Just what or who exactly prompted you to join these sites?

KEVIN POLLAK: A pal, Jason Calacanis (Mahalo.com), introduced me to Twitter by signing me on, and the next thing I knew I had followers! For anyone who suffers from “Hey, look at me” disease as badly as I do, this followers thing was just too good to pass up. Then, as I was doing on-going commentary on Twitter during the Oscar telecast, and ended up with a shit-ton of replies, all insisting I was making it the best Oscars they had ever watched, I was hooked for life. It was during that Twitter-a-thon that I met a fella’ named Jipsi who then brought me to the community of YouTube.

ACTING-BLOG.COM: Were you shocked at the vast number of followers that quickly evolved to what I now believe to be above 82, 000 people on Twitter?

ACTING-BLOG.COM: Does that huge following intimidate you at all?

KEVIN POLLAK: It makes me smile and giggle a little, actually. First of all, it’s ridiculous, and I can’t really take it tooooo seriously. It’s really kinda cool. I do feel a sense of responsibility but, really, just to keep up the flow of my tweets, and the juicy goodness, therein.

ACTING-BLOG.COM: I know that you’re filming a show for the history channel entitled, ‘What Every American Should Know’ – seemingly; a lot of your followers have become interested in this and anticipate it’s airdate – Does this prove how beneficial Twitter can be in gaining interest in your current projects?

KEVIN POLLAK: No doubt Twitter seems to be a potentially powerful marketing tool, but I really think those who choose to market themselves walk a thin line. I know for myself, I worry about crushing that delicate balance between answering all the ‘replies’ that ask what future projects of mine they can look for, and just whoring every single spec of work I’m tinkering with!

ACTING-BLOG.COM: In terms of resources such as writers, actors and designers -Do you think a medium such as YouTube or Twitter could ‘get the ball rolling’ for projects that you have considered in the past, that you just haven’t had time to unfold?

KEVIN POLLAK: There does appear to be a greater, sudden, interest coming from Twitter land in what someone such as myself is up to. Whether or not they will follow through with their alleged loyal following is yet to be seen. I believe they will. I hope they will, and it certainly is one of the main factors in my decision to do Kevin Pollak’s Chat Show, which will debut as a live streaming video talk show on Sunday, March 22nd, at 5pm, PST. I’ve mentioned that a lot, and people have responded hugely with their alleged interest. If it’s genuine, then we’ll do the show every Sunday at 5pm, PST. If not..

ACTING-BLOG.COM: Do you think that Twitter could prove a useful resource for finding new writing or acting talent?

KEVIN POLLAK: It could, certainly. That’s one of the things I’m curious about. That would be truly a wonderful aspect of Twitter land. No pressure, btw.

ACTING-BLOG.COM: Would you recommend that other artists join YouTube or Twitter? If so, What benefits do you think can arise from its use?

KEVIN POLLAK: I have recommended it to others and I believe several are already into to it. The benefits, as well as the possibilities are boundless, if you ask me. Oh. Wait. You just did, so yeah.

ACTING-BLOG.COM: Kevin Pollak, It has been a pleasure.

Kevin Pollak is an actor and comedian who regularly produces his own YouTube videos and starred alongside Tom Cruise in A Few Good Men.