Acting Coach Scotland Blog Your Script is NOT a Shopping List 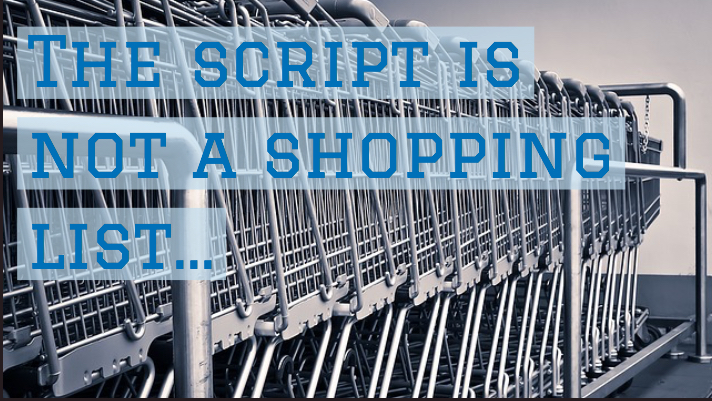 Working with a script is a tough thing. Pages and pages, lines and lines of someone else’s ideas that need to be brought to life in a physical and visual way, vocalised and performed.

That isn’t an easy job, Sanford Meisner called the script “the actor’s greatest enemy.” Meisner believed that because the ideas came from outside yourself, the challenge was finding a way to make that connection and bring the script to life in a personal way.

One of the most common issues that I find, even in well-trained actors, is treating the script a bit like a shopping list. What I mean by that, is that it’s just a bunch of words that have no different weight from each other and are all spoken similarly with the same tone, inflection and intention - just like a shopping list.

But a script is far from a shopping list.

First off, a script is a series of thoughts, which must be expressed individually. The punctuation will help you to split up the thoughts. Meisner actually advised people to throw away the punctuation, to break the perceived rhythm of the text - but it’s a brilliant reminder from the writer of the structure of the thoughts of the character.

It’s very easy to get stuck into a rut with a text. You can find yourself acting very similarly for a big chunk of text and the audience will start to fall asleep as you get stuck in a single mode.

Consider a script a series of bigger ideas clumped together in chunks. But inside those chunks all the ideas need to be represented individually. That means bringing a different energy, pace, intention, tone, volume, gesture to the different sections of any section of text.

And take your time! One thing actors tend to do is race. Take your time, spend the time enjoying every moment of acting. The commas and full stops are there for a reason and becoming aware of them acts as a reminder that there’s no need to speed.

Gear changes are vital to chunks of text and the gear changes creates make the piece engaging to listen to and helps to hook the audience into the story and the performance. Gear changes are simple, but as actors we often don’t use them enough. Gear changes are changes of energy, pace, intention, tone, volume - motivated by the material, caused by the intentions, thoughts and actions of a character. They are the tools that directors should use to direct you, but they are easy enough to use yourself.

When you take a piece of text and you break it into chunks, follow the logic of the ideas. Then think about how those gear changes will look in juxtaposition to each other, they will grab the attention. Because holding the attention is so important, particular these days where our attention and focus suffer a great.

The most difficult part of a script is when there is a literal list. “I’m looking for love. I’m looking for hope. I’m looking for decency.” The repetition cause us to treat the lines like they are equal. But they aren’t. Those are three separate thoughts, with potentially three different intentions, repeating them in the same way makes it boring for the audience.

Treat the script like it a series of tiny pieces that all need to be treated differently and you can bring the script to life. Treat is like a shopping list that’s all the same and you’ll send the listener to sleep.