Why Another Foundation Acting Course in Scotland? A Drama School Audition Preparation course incorporating a HNC in Acting (Subject to Approval)

Why Another Foundation Acting Course in Scotland?

Today we released news of our new Foundation Acting Course starting in September 2019 on Facebook and Instagram. It’s going to be a One Year Full Time Drama School Preparation Acting Course which incorporates a HNC in Acting (subject to SQA Approval).

A friend of mine wrote to me to ask why. He was implying once again, as he did when the full time professional diploma was launched that people don’t need more acting courses, and particularly ‘expensive’ private ones.

Well, we decided that Scotland could use a Foundation Acting Course that was aimed at talented young people that couldn’t get onto BA (Hons) Acting for whatever reason, but that stood a much stronger chance if they did a course aimed at it. 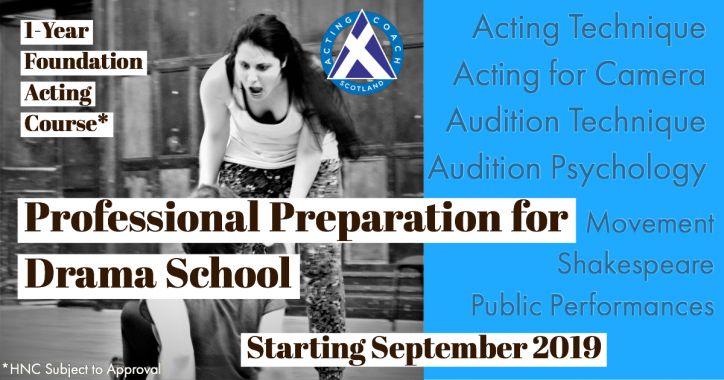 We’ve created a course that include the standard skills of Acting, Movement, Voice, Production and Performance. But at the same time, we should train these talented drama school applicants to select great contemporary and classical monologues and to use them to deliver performances that bring them success in their drama school auditions. So this course includes extra Shakespeare training, Monologue technique and coaching, as well as Audition Technique, Audition Psychology and mock auditions to try out their skills in advance of the real thing.

We are aware that there are a number of good HNC and HND acting courses in Scotland, but none that focus primarily on preparing their students for Drama School auditions. We also wanted the course to be affordable to all, and while we cannot offer the course for free as the local colleges can, all Scottish students should be able to afford the course through a combination of SAAS funding, student loan and bursary to live on. The course will cost around £5000, which is roughly £1400 from SAAS and £3600 from the Student Loans Company. Students will have around 20 contact hours per week, which will give them plenty of chance to work outside of class. The course will run from Monday to Thursday. A part-time version is under consideration, but there are no plans to start this course at the same time as the full time foundation acting course.

There are very few foundation acting courses in Scotland. Perhaps because of the small population, or perhaps because of the smaller industry. But we aim to make ourselves the go-to Foundation Acting course in Scotland for people that are committed to going to drama school, but need a step up and a new level of experience, skills and knowledge to get into their choice of acting school.