The Main Reasons Why You Didn't Get Into Drama School

The truth is you could just be too young. Schools like to take mature applicants and so if you’re 17 the odds are seriously against you. They like their students to have life experience. It’s nothing personal, I know 17-year-olds that are tough as old boots and 30-year-olds who crumble under the pressure of performance. But in general, life experience equals dealing better with the professional environment of actor training at drama school.

Acting seems like a good idea. But what if you don’t have enough experience? Where do you get it? I suppose you can do amateur plays and take some local drama classes. But that might not be enough. There are a number of great foundation acting courses, but they can be very expensive. I do know some people that try to get out and get professional experience before drama school, but this is tough and only a few will succeed.

You know, it’s possible, they just didn’t like you. The world is unfair. It’s probably not your fault in any way at all, you can’t do much about that. Maybe as you progress and develop yourself and your abilities and experience, you start to become the kind of person they are looking for.

Right now (and I don’t know you, so don’t take it personally) you may not be ready. Your ability might not be in a position to show its true self. You need to be trainable and you need to have potential. At ACS, we actually don’t look solely at acting ability - as studies show that talent is the least successful predictor of future success when considered next to ownership of your own training and grit - the determination and staying power to succeed.

I actually don’t care what pieces you choose. Trying to be original is almost impossible for someone trying to find something in the school library and drama schools are kidding themselves if they think people read plays for fun these days. (If you do, I love you). Actually, what you do with your pieces if far more important than the selection itself. However, choosing stuff that suits your casting type, helps you shine, gives you an opportunity to show them your abilities - that does matter. And sometimes that’s a tricky thing to discover.

If you still want to make it into one of the big traditional drama schools, our Foundation Acting course is specifically designed to help you get into Drama School. With intensive professional training in acting, voice and movement, as well as production and performance opportunities - as well as drama school monologue coaching, audition technique, audition psychology and mock auditions. Our course is almost half the price of other courses like it in London. Want to massively improve your chances of success? Get in touch. 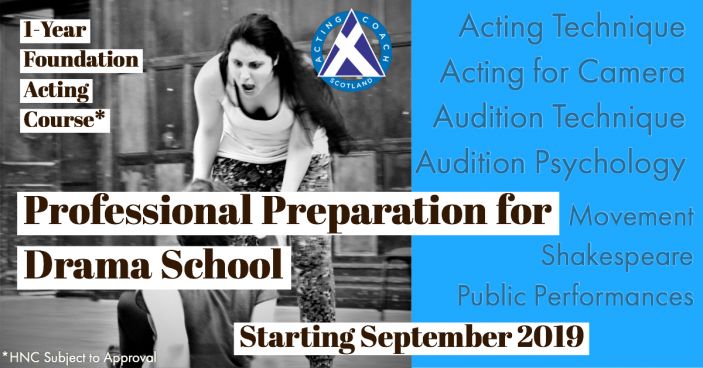 Mark Westbrook is the Course Leader of the Diploma in Acting for Stage and Screen and the Co-Principal of Acting Coach Scotland.