On Acting for Camera

On Acting for Camera

At Acting Coach Scotland, all of our acting programmes, full and part-time include acting for camera classes. Preparing actors for acting on camera is essential for today’s industry. If I’m honest, less and less people imagine that they are preparing for a career in theatre. Almost everyone is looking to get onto screen. Now, the industry doesn’t always work like that - but it doesn’t stop people wanting to learn camera work primarily. 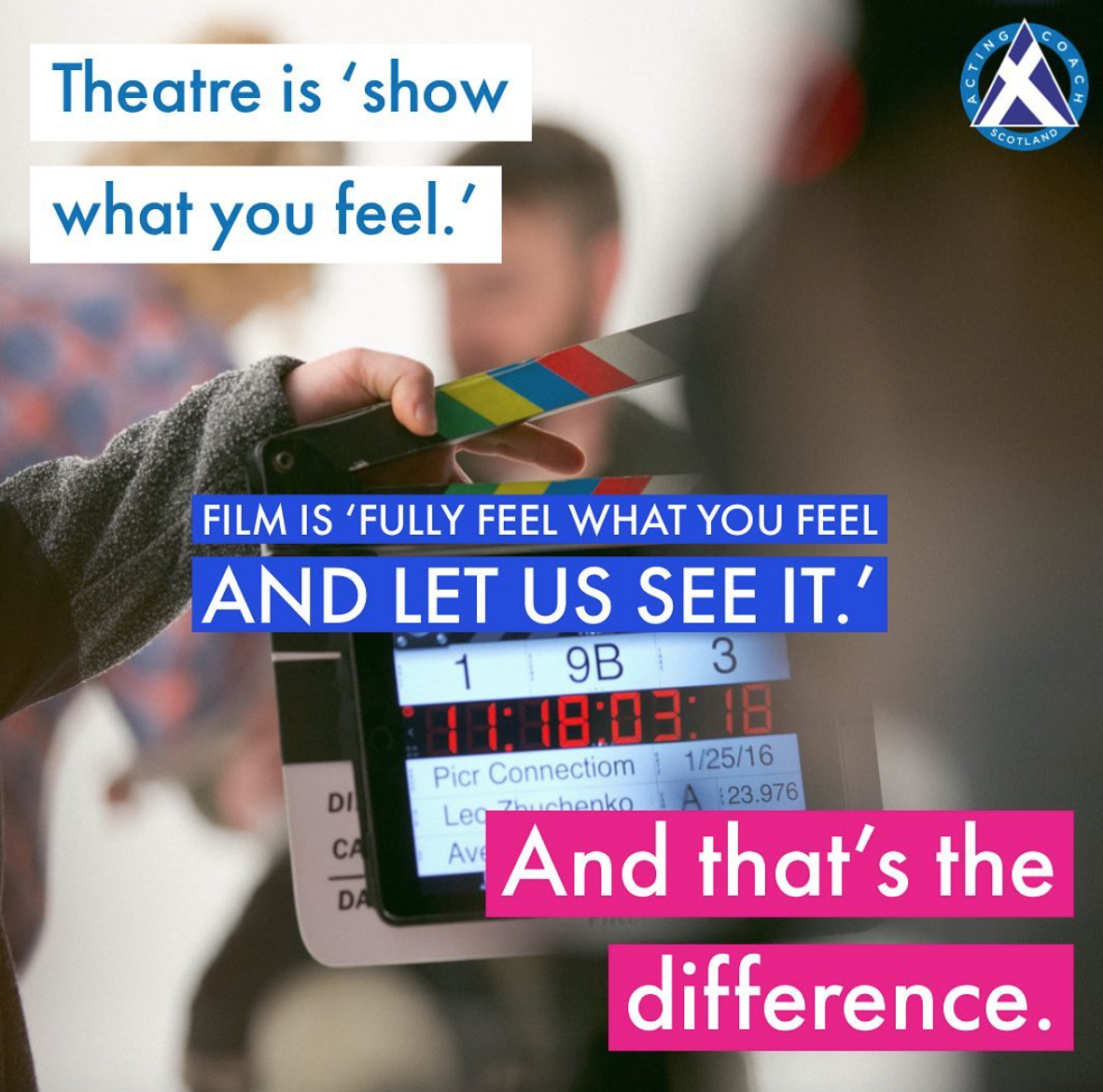 What’s the main difference between acting for screen and acting on stage?

First, I don’t think you’re acting for screen, you’re acting for the camera. I know we don’t call theatre acting ‘acting for a live audience’ but we should. Because that’s the main difference. When acting on stage, you need to show what you’re feeling. I don’t mean fake, I don’t mean ‘present’, I mean make sure that what you’re feeling is available to the audience sitting in the theatre. If that means dialling up the level to make sure that everyone can see, hear and feel it, so be it.

But on camera, it’s totally different. The camera, the unblinking eye, it comes to you. You don’t need to project outwards towards it. It reaches into you to see what you’re thinking and feeling. You have to be able to be honest there. It’s not easy. We spend our lives developing layers of defences. We only let certain people into those defences and often not all the way.

Of course, the other great difference is the lack of rehearsal. Students are often shocked that they won’t get any rehearsal in working on film and television. Why is there usually no rehearsal? Time is money. So that means that you cannot turn up with no thoughts, feelings and ideas about what you’re going to do - so you need the confidence to make decisions and choices - ready to try - and ready to give up if they don’t work.

Is that all I need to know?

Acting for camera has a lot of small technical issues that you need to be aware of. The distance to the microphone makes shouting and raising your voice an issue. The sensitivity of a microphone also means that you really do not need to speak up at all. Props and other items need to be used differently depending upon the shot type. In Patrick Tucker’s book The Secrets of Screen Acting, he has a wonderful cartoon of a normal person drinking a cup of tea and an actor on camera, and on camera - you have to hold it much higher to keep it in the shot.

Then there’s continuity. Remembering how you did things. If you want the master shot to match up to the other shots that will be taken, you can’t pick up the mug with your left hand in one shot and the right hand in the other - unless you want to appear on one of those ‘out-takes’ or ‘bloopers’ shows.

Furthermore, there’s also understanding what you have to change when the shot changes. A medium and a close up shot require different things than a full or wide shot.

While the basics of acting remain the same, shifting to camera means understanding the basic differences and similarities and working to master those skills.

If you’re ready to start a career in acting, one of our full time acting courses would be the perfect way to launch in this industry. Take a look at what we offer on our 3 unique full time courses.

Mark Westbrook is the Co-Principal of Acting Coach Scotland and the Leader of the 2-Year Diploma in Acting.